ETA’s infrastucture worked to put pressure on families, discredit the victims and prevent society from mobilizing. Only then would they achieve their demands, be it money or a political concession. Proof of this is the sticker «Aldaya, pasta ya» (“Aldaya, pay up now”), dedicated to José María Aldaya, a businessman kidnapped for more than 300 days. 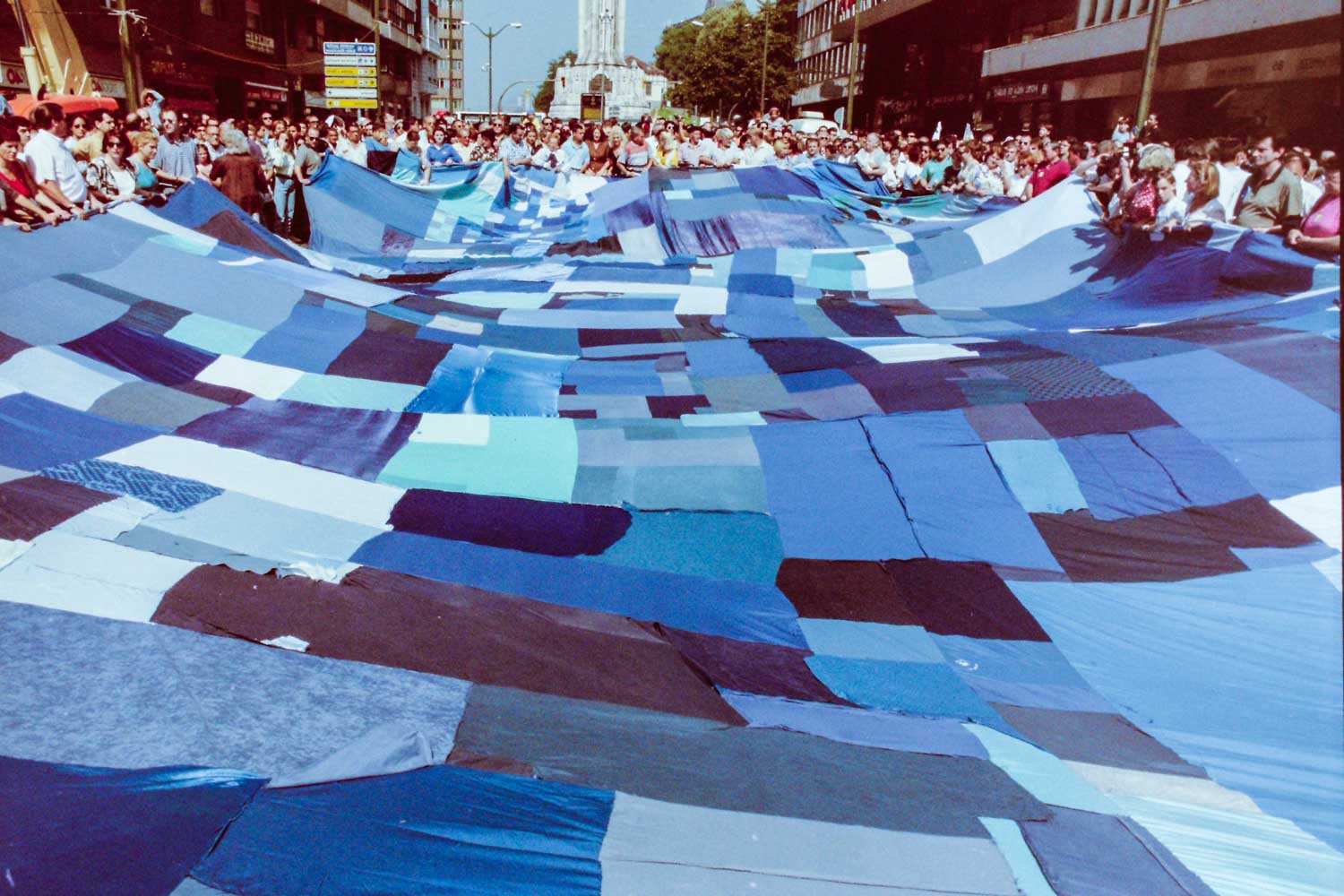 This intimidation could not hide the enormous work of the pacifist movement campaigning for the freeing of the hostages. Groups such as Gesto por la Paz (Gesture for Peace) or Denon Artean held demonstrations and other types of initiatives. For example, the distribution of calendars, which served to raise awareness of the number of days that those kidnapped had been away from their family and home. Due to its significance, the blue ribbon symbol deserves a detailed explanation. It was given to us by Julio Iglesias Zamora, a engineer kidnapped by ETA.

Julio Iglesias Zamora. The blue ribbon and a letter from the cell

«We Basques, or at least the majority of Basques, should be ashamed of our silence and for looking the other way from so many atrocities and not denouncing them categorically. We have not defended the most elementary ethical principles for coexistence. We didn’t do everything we could have done.

There cannot be several accounts of the atrocities committed and that the story is told as a series of consensual, approved or accepted lies. There is no valid project for the future without true memory.

The victims have not been guilty of absolutely nothing, although from different spheres they were sentenced and executed again, applying the phrase: “they must have done something”.

Some people in this country, if they have enough courage and self-criticism, should ask themselves what has criminal violence achieved after more than 35 years?

A special mention for Gesto por la Paz, Gesture for Peace. The Basque society will always be in debt to Gesto. In particular, those of us who have been directly supported by Gesto, at extremely difficult times. We will never find enough words to thank you for your colossal work. Gesto had the courage, integrity, firmness and dignity to confront totalitarianism with silence and words, with peaceful concentrations and with symbols such as the blue ribbon.

What am I going to say about the blue ribbon! I was the first beneficiary and thousands of people wore it for the first time in my four-month long kidnapping. And the blue ribbon marked a change of attitude in society in the face of intolerance, fanaticism and criminal violence. With this simple symbol the revolution of the blue ribbon was created, a symbol for history, a symbol of peace and the defence of human rights.

The members of Gesto have been the anonymous heroes who make a country great.

Any kidnapping is unfair, illegal and, above all, inhumane. Full-blown torture. I recommend visiting the interior of the cell.

During the 117 days of my abduction, I sent letters to my wife and to the company approximately weekly. They never reached their destination and I have seen some like the one shown here, 27 years later. Paraphrasing Gustavo Adolfo Bécquer who wrote “Letters from my cell” and I called these letters “Letters from my coffin”. It was the way to stay connected to the outside world and hope for a future in freedom».

ETA has not been the only terrorist organization that has resorted to kidnapping in Spain. María Cordón, daughter of businessman Publio Cordón, kidnapped and then murdered by GRAPO, presents us with two pieces from the collection.

Maria Cordón. Letter and door frame of the cell by Publio Cordón

«My father sent several letters during his abduction. The truth is that he really liked to write. One of those letters was sent to his mother, to my grandmother, Benita. Well, it is a very endearing letter where basically, what he tries is to encourage his mother, my grandmother, and tell her that he will be out soon, that he is fine, that he loves her very much. He remembers a few things. A letter in which he tries to appear motivated and appear strong and well. I suppose that there, in his … in his horrible cell, he must have made a tremendous effort to reassure his mother and all of us.

He sent several letters to my mother, also to his daughters, to his friends, they let him write a lot. Logically, then they would review and cross out many paragraphs that they did not want known.

And the door frame, which he marked every day with a stick, each day that went by with a stick … And in the end … well, now …, the last mark, on the 16th, well, no longer … He no longer had the option of marking another day, he could no longer make a mark. Surely, that was the day they killed him».